Steven Pinker in his best-selling book The Better Angles of Our Nature, set out to show that violence has been greatly reduced by the state. I'll begin by addressing the problem of homicide as a proxy for inter-personal violence.

Among the claims have been that the state has decreased the homicide rate, and thus, state societies allegedly have much lower rates in state societies. To prove this point, Pinker often uses Keeley's 1996 study War Before Civilization, which had extremely high estimates for non-state societies. The problem specifically for homicide, is that Keeley combined both homicide and war deaths to get his figures. For obvious reasons, there is a need to separate war casualties which is a political and institutional (at least in the sense of defending the pre-state "institution" of the tribal band), from homicides which is considered an inter-personal conflict.

Here is Pinker's chart of homicides based on that estimate: 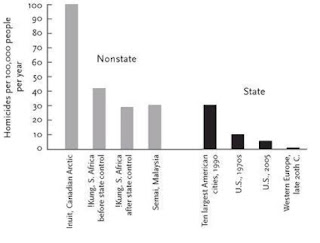 A 2011 review of violence in non-state societies shows that virtually all other estimates are tiny compared to Keeley's and his are only ones that mix war casualties with homicides. To see what I mean, here's a long chart showing the estimates (without war deaths) in 72 societies.

To get a sense of scale, the homicide rate in the United States today is 4.8 which also the lowest its been in decades. Likewise, Pinker frequently estimates in his book that the lowest homicide rate on the planet is in Western Europe which is around 1 per 100,000: 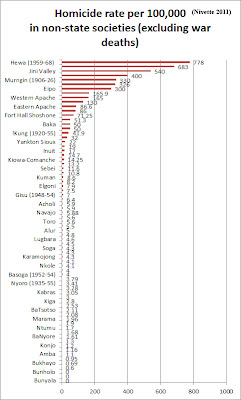 While there are some extreme outliers, many are around or lower than the US rate today. Some have virtually no homicide whatsoever, making them lower than Europe today. This is pretty remarkable given that the 800+ page book keeps reminding us about how unthinkably small violence has shrank.

Now did violence decrease from pre-state societies? Likely it did for a variety of reasons (which deserves its own post) but it was not on the kind of scale Pinker estimates, nor does it make it impossible to a non-violent society that also does not have state (as the handful of stateless societies show).
Posted by Emanuel Goldstein at 4:07 PM